It’s confirmed: The drones are overhead.

Records newly released to the Electronic Frontier Foundation reveal the federal government has approved dozens of licenses for unmanned aerial surveillance drones all across the United States.

“These records, received as a result of EFF’s Freedom of Information Act (FOIA) lawsuit against the Federal Aviation Administration (FAA),” the EFF reports, “come from state and local law enforcement agencies, universities and – for the first time – three branches of the U.S. military: the Air Force, Marine Corps and DARPA (Defense Advanced Research Projects Agency).”

Some of the records show drones used for purposes as sensible as helping the U.S. Forest Service fight forest fires.

Others purposes, such as performing aerial observation of houses when serving warrants or covert surveillance of drug sales, however, have prompted the EFF to question privacy issues.

“Perhaps the scariest is the technology carried by a Reaper drone the Air Force is flying near Lincoln, Nev., and in areas of California and Utah,” EFF reports. “This drone uses ‘Gorgon Stare’ technology, which Wikipedia defines as ‘a spherical array of nine cameras attached to an aerial drone … capable of capturing motion imagery of an entire city.’ … This technology takes surveillance to a whole new level.”

The use of military drones further raised flags in a New York Times report earlier this year, when reporter Mark Mazzetti joined a group of observers watching drone use at Holloman Air Force Base in remote New Mexico and discovered the military was practicing for foreign missions by spying on American vehicles.

“A white S.U.V. traveling along a highway adjacent to the base came into the cross hairs [of the drone's view] and was tracked as it headed south along the desert road,” Mazzetti wrote. “When the S.U.V. drove out of the picture, the drone began following another car.

“‘Wait, you guys practice tracking enemies by using civilian cars?’ a reporter asked,” according to Mazzetti. “One Air Force officer responded that this was only a training mission, and then the group was quickly hustled out of the room.”

The EFF clarified that while the U.S. military doesn’t need an FAA license to fly drones over its own military bases (these are considered “restricted airspace”), it does need a license to fly in the national airspace, which is almost everywhere else in the U.S.

“And, as we’ve learned from these records,” EFF reports, “the Air Force and Marine Corps regularly fly both large and small drones in the national airspace all around the country.”

In fact, compiling the various approved applications for military, educational and law enforcement use enabled EFF to create a map of drone locations in the records they’ve received so far: 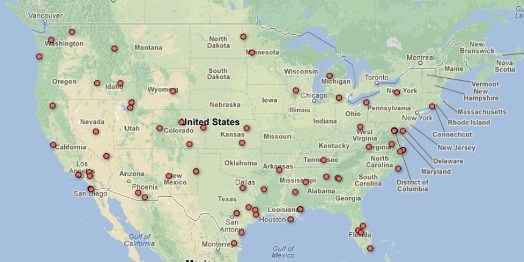 Yet some applicants sought FAA approval for multiple drone uses, a potential problem EFF worries could lead to “mission creep.”

“For example, the University of Colorado (which the FAA said has received over 200 drone licenses) requested a license in 2008, not just to study meteorological conditions but also to aid ‘in the study of ad hoc wireless networks with [the drone] acting as communication relays,’” EFF reports. “And Otter Tail County, Minnesota, wanted to use its drone, not only for ‘engineering and mapping’ but also ‘as requested for law enforcement needs such as search warrant and search and rescue.’”

The sheriff’s department of Queen Anne County, Md., stepped up its drug battles by partnering with the Department of Justice, Department of Homeland Security and Navy to apply for permission to use a WASP II drone for a variety of purposes.

“The WASP II will be used for surveillance missions,” the FAA records state, “for example, search[ing] farm fields for marijuana (the operator would be stationed on the farm and would use the WASP to see the crop growth from the air), conducting search and rescue in remote areas (QA’s County has a state park. Searching the river and coves can be difficult because of the high grasses. An aerial view would be of significant help), surveillance of people of interest (watching open drug market transactions before initiating an arrest), providing aerial observation of houses when serving warrants.”

Records show applicants had to provide precise details of the areas they wanted to watch with drones, such as the map Queen Anne County developed below: 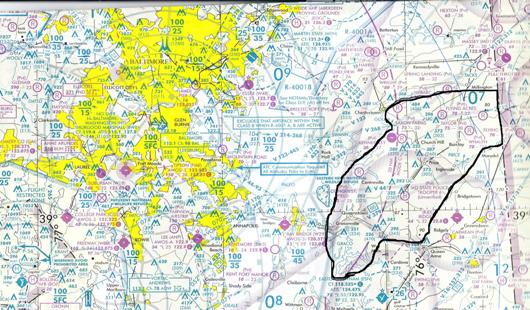 Map that accompanied Queen Anne County's application, with drone area circled
The EFF asserts, however, that despite obtaining several thousand pages of information on drone use in America, one glaring hole in the records is evidence the FAA had “any concerns about drone flights’ impact on privacy or civil liberties.”

“The FAA recently announced it wants to slow down drone integration into U.S. skies due to privacy concerns,” EFF said. “We are hopeful this indicates the agency is finally changing its views.”

Yet EFF claims more than half of the information it sought in its FOIA request a year and a half ago has yet to be released, not only leaving the map above significantly incomplete, but also raising questions about what is being withheld.

Even in the records that have been provided, some of the information has been redacted, including much of the Marine Corps’ records as well as those from some police departments, specifically the Orange County, Fla., sheriff’s department and Mesa County, Colo., sheriff.

“Before the public can properly assess privacy issues raised by drone flights, it must have access to the FAA’s records as a whole,” the EFF said.