Big booty hoe might just be a genetic trait? 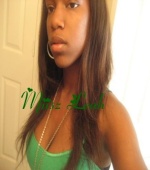 Big booty hoe might just be a genetic trait?

I recently learned the story of Sarah Baartman, the South African women ripped away from her homeland in 1810 and showcased as the “Hottentot Venus” in Great Britain for years. After her death at age 26, her genitalia and buttocks were removed and placed in a French museum until 2003. Needless to say, the story stuck with me, yet it was not only because it represented one of the most extreme cases of European racism towards those of African descent. As a black woman, I have often succumbed to the stereotypes sometimes associated with black women’s “curvaceous” bodies. (1) Considering the many images prevalent in American society depicting black women with large butts and breasts as well as wide hips, it is easy to think that these characteristics are in the biology of black women. As I come from a family of women abundant in the breast and butt area, I too have often wondered if these were standard phenotypes of today’s black woman.
When I stumbled upon the story of Sarah Baartman, I wondered if her body was an early example of this supposed black phenotype. After some researching, I found out that Baartman’s enlarged buttocks and genitalia were not examples of black female characteristics, but an example of steatopygia. The Merriam-Webster dictionary defines steatopygia as “an excessive development of fat on the buttocks that occurs chiefly among women of some African peoples and especially the Khoisan.” (2)Dictionary.com defines the term as “an excessive accumulation of fat on and about the buttocks, especially of women.”(3) Another source explains that the fat “is not confined to the buttocks regions, but extends to the outside and front of the thighs, forming a thick layer reaching sometimes to the knee”. (4) The trait, which is usually attributed to females, is also a characteristic of the Pygmies ethnic group of Central Africa and Southeast Asia. Although Baartman was paraded around Europe as a freak show, South Africans lauded her steatopygia as a sign of beauty and femininity.
Steatopygia is also one of the traits of the evolving human adapting to his surrounding as it was a means of survival in seasonal environments. “It maximizes their bodies’ surface-area/volume but keeps enough fat to produce hormones for menstruation. With fat deposited heavily in only certain areas of the trunk of the body, limbs are left slim enough to expel heat more efficiently.” (4) This explains why steatopygia is very useful in dry warm climates such as those in Africa, and other places where those of African descent inhabit.
Thus, I wonder if steatopygia plays a role in the body of today’s black woman. Of course, I cannot generalize and state that all women of color who are of African descent share larger backsides, but I think it may be fair to say that this is a trait more commonly associated with these women. I wonder if, as the black woman has evolved and adapted to her surroundings, mixed with other races and ethnicities, a mild form of steatopygia exists within our genetics? I say a “mild” form because it is clear that most, if not almost all do not possess the enlarged buttocks shown beside the definition of steatopygia. Yet as women of African descent have been known to possess more backside than their other racial counterparts, perhaps this is an example of an evolved form of steatopygia. Conversely, perhaps this trait associated with black women all boils down to inheriting the genes of one’s parents. My mother and her aunts all have large buttocks, so I was not surprised when my sister and I inherited the same characteristics, but in a milder form. I presume I will pass this down to my daughters and so on and so on. In this case, maybe this is not steatopygia at play, but merely genes from my mother and her family. Another “story” to help explain black women’s body types might be linked with their eating habits.
The story of the black woman’s body type certainly cannot be explained in a short forum however, I gained a new perspective by taking an inquiry into the subject and researching steatopygia. The research only served to enhance my summary of stories concerning this topic and helped to formulate my own thoughts. I believe that all of the aforementioned factors shape the black woman’s body type with some playing a larger role than others for some black women. In my family’s case, I believe that a mild form of steatopygia existed as my ancestors come from the dry and warm environment of Haiti. Perhaps in earlier times, this trait was used to expel the sometimes unbearable heat of the Caribbean. However, as my ancestors evolved and co-mingled with those of different races and ethnicities, the steatopygia may have become milder. As more time passed, I believe genetics played a role in maintaining this body type. Currently, I believe that it is our eating habits, especially our tendency to eat not-so-healthy-foods that influence the body types of the women in my family. Although my presumptions are not finalized, I will stick to this summary now until I am able to observe new evidence and research to enhance or dispel my theory.

Re: Big booty hoe might just be a genetic trait?

I must say, this was a very interesting read. Got me thinking of how they say women in the south are the thickest, and from your post it says heat plays a factor. And it is hotter than a muh fukr down here lol. My mother and some of her sisters have large asses, and they say they get it from grandma. I tell you this much, your post will have me looking at women to see if it's been passed down, and also where they are from to see if their location played a factor. I'll let you know what I find. Thanks for the info.
_________________
IF YOU GONNA LEAD, LEAD BY EXAMPLE