THE KINGDOM CALENDAR (Years 2013-2016) is available in FREE printable format, click here. Years 2013-2016 is the only three and one-half year counting period in the 19 year cycle of the Jewish Calendar in which The Kingdom Calendar does not match to the day. It is about 30 days off. Why? What might happen? Click here to read The Conflict Over God's Appointed "Times & Seasons" and The 99 Year Oracles.

Attempts to establish the timing of final events is against all odds; and, any match would be a God-ordained disclosure above and beyond any human genius. Only Almighty God can choose the method through which He will break the ancient codes, but they will surely be broken and unsealed. We know, because this is Messiah's sworn promise to the final generation (Daniel 12:9-10).


Can We Know the General Time of Messiah's Return?

The Kingdom Calendar--The Appointed Times & Seasons was first established in 1990. There is an obvious connection between The Kingdom Calendar and the Jewish Festivals listed below as obtained from Jewish sources. The current cycle (2013-2016) does not match in terms of the timelines between the Festivals (off by about 30 days), and is the only period in the 19 year Jewish Festival cycle in which it does not. The next match occurs between Purim 2014 and Yom Kippur 2017; however, God has His plans and purposes. He may likely fulfill The Kingdom Calendar during a period when it does not match, for God "changes times and seasons; he deposes kings and raises up others. He gives wisdom to the wise and knowledge to the discerning," according to Daniel 2:21, and Messiah can adjust the times (Festivals) and seasons (summer to autumn) to fit His Calendar at the time of His choosing.

The "times and the seasons" are directly tied to the end of the world, and God has provided very "specific" timelines in Daniel and Revelation for the final work of His redemptive plan. However, we still cannot know the actual "day or the hour" of Messiah's visual return. Jesus said He would cut short the great tribulation--"for the sake of the elect those days will be shortened," Matthew 24:22--so the day and hour is unknown. Nonetheless, we can know the times and the season, for no matter what prophetic view you hold, there is always a timeline involved--whether seven years, or three and one-half years. Therefore, once final events begin, we can know the general time of God's judgment of the world. The "thief in the night" phrase in the Scriptures is not a reference to a secret rapture of the church; it is a reference to the final destruction of the wicked, who cannot escape God's wrath, which Messiah will inflict at His visible return. This is confirmed by Paul to the church at Thessalonica. The saints "are not in darkness so that this day should surprise" them like a thief. We are children of light, awake and sober... looking and watching. The Day of the LORD will not surprise the watching people of God.
"Now, brothers and sisters, about times and dates we do not need to write to you, for you know very well that the day of the Lord will come like a thief in the night. While people are saying, “Peace and safety,” destruction will come on them suddenly, as labor pains on a pregnant woman, and they will not escape. But you, brothers and sisters, are not in darkness so that this day should surprise you like a thief. You are all children of the light and children of the day. We do not belong to the night or to the darkness. So then, let us not be like others, who are asleep, but let us be awake and sober," 1 Thessalonians 5:1-5


If you believe the timelines of prophecy will always be locked away, never to be understood... I challenge you to consider this question: "Why would God expose very precise prophetic time periods in the Scriptures, if they were not for the benefit of the last-day saints and the counting of God's prophetic time?" The last generation upon whom the end of the world will come is promised an increase in knowledge and spiritual insights, and an understanding of how events will transpire in the final "unsealing" (Daniel 12:4). Daniel 12:10-12 adds, "Many will be purified, made spotless and refined, but the wicked will continue to be wicked. None of the wicked will understand, but those who are wise will understand." And, what will the wise understand according to the verse that follows? "From the time that the daily... is abolished and the abomination that causes desolation is set up, there will be 1,290 days. Blessed is the one who waits for and reaches the end of the 1,335 days." The wise will understand what the 1,290 and 1,335 days represent. And, the wise are promised a blessing for waiting patiently through the days of trial to reach day 1,335. Our case rests on the Biblical evidence and common sense. God revealed His prophetic times, for the day would come when these periods must be understood... during the days of their fulfillment. Daniel understood the power of God to reveal important details concerning His final plans to those with a wise and discerning spirit; he wrote, "Praise be to the name of God for ever and ever; wisdom and power are His. He changes times and seasons; he deposes kings and raises up others. He gives wisdom to the wise and knowledge to the discerning. He reveals deep and hidden things," Daniel 2:20-22. Wisdom says, "I don't know it all, nor does the leaders of my church or synagogue. I have more to learn from God's Word." Discernment says, "I will trust God to show me His unfolding mysteries that have been hidden since the foundation of the world, because God promises that "when He, the Spirit of truth, comes, He will guide you into all the truth. He will not speak on His own; He will speak only what he hears, and He will tell you what is yet to come," John 16:13.

Humbly ask your minister, priest or rabbi what the 1,290 days and 1,335 days of the Daniel 12 prophecy represent and reveal about God's final plan for Planet Earth. The timelines were so important to God that He revealed them through His prophet Daniel for the knowledge of the saints, well in advance of their fulfillment. Can your spiritual mentor tell you why they were written down, and when and how these prophetic days will be fulfilled in the future? Or, if you hold the historicist view--how the timelines were fulfilled in past history (even though God's Word clearly says the time periods would be understood at the time of the end during the days of trial)? As followers of Christ, we all need to study the Scriptures with an open mind, understanding the Spirit of truth to be our source of inspiration and wisdom. There is no human who can boast of full knowledge and a complete understanding of the mysteries of the Ancient of Days. "Who has been His counselor?" (Romans 11:34; Isaiah 40:13). However, the "wise will understand," God promises; and, He does not lie. Heaven's roadmap through the final trial is coming to light, for the shadow of things to come is about to meet reality (Colossians 2:16-17). There is no excuse for God's people; final events need not surprise us like a thief in the night. However, most will be shocked and unprepared for the devastation and unfolding of prophetic events long foretold in the Hebrew Scriptures, which will begin in the Middle East with war and devastation and spread across the globe with lightning speed.

All Jewish holidays begin at sundown on the evening before the date shown. On holidays marked "*" strict observers do not work. Lunar and solar eclipses that fall on God's Holy Days below are linked in blue, and could represent precursors of God's great wrath to come as found in the trumpet and vial plagues of the book of Revelation. The next watch dates are in "bold underline". Note the lunar and solar eclipse schedule as well that will occur during the appointed times of the end. Jewish tradition has mixed views on the mystical and eschatological meaning of lunar and solar eclipses. However, the Talmud (Tractate Sukkah 29a) says that lunar eclipses are a sign of Divine wrath against the Jewish people for moral failings, while solar eclipses are a bad sign for non-Jewish nations. 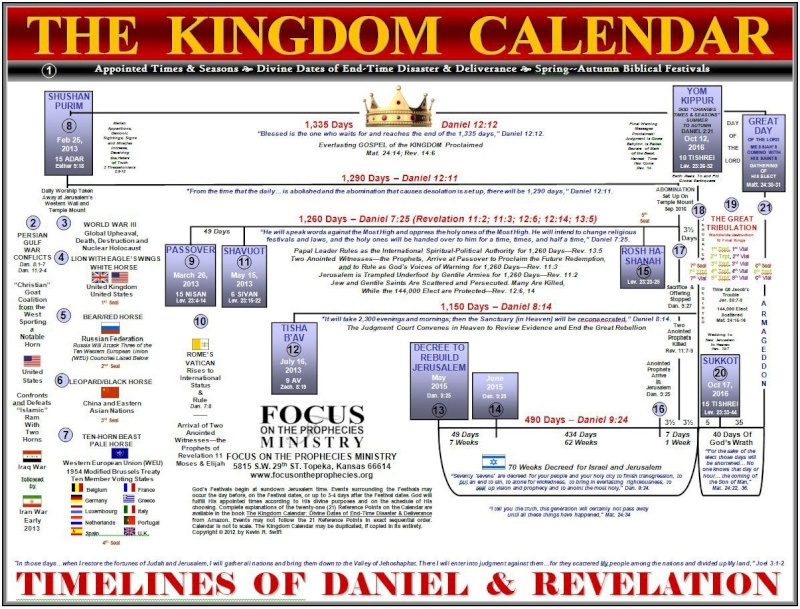